I bought a made-up Superquick card building of a town hall, it will also pass as a quayside building, customs house or warehouse. I've based it on a bit of 3mm mdf with a covering of paved 'paper sheet'. 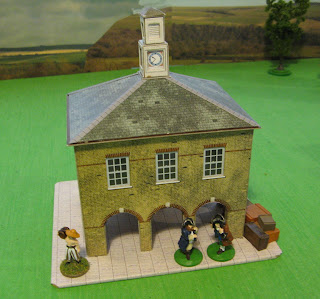 I had hoped to get these finished sooner but the Xmas preparations put a dent in the painting schedule .. 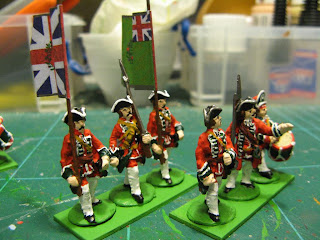 Now to get the rest of the regiment ready to paint...
Posted by tidders2 at 3:15 AM 2 comments:

The last of the English european units has reached the painting table. English infantry regiment no 39, the command is first, then to be followed by the rankers; the grenadier company is already finished. There are two command stand sets one for India and one for 18C europe for the unit to be a Fenwick battalion.

The outline plan to add the Indian allies is as follows:
1) Paint up the elephants I got ready a while back.
2) English ally - Bhaji of Bhovindi, some cavalry and infantry and artillery
3) French ally - Nawob of Tandoori, some cavalry and infantry and artillery
4) English and French sepoys
Posted by tidders2 at 7:24 AM 2 comments: