Initially each colonial european army (one french the other british) to consist of:
1 regular infantry battalion
1 battalion of local european volunteers
1 battalion of german 'volunteer/mercenaries'
3 battalions of Sepoys
1 battery of artillery
1 squadron of cavalry, probably dragoons

I have added a link to Bears Den Miniatures who do a mughal india range.
Posted by tidders2 at 4:50 AM 2 comments:

I've been sorting out trees and palms for use either in the carribean or southern india, as you can see I've accumulated a few ... 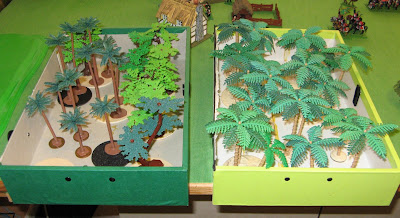 The trees and palms have come from toy sets or bought as oddments from 'Car Boot' sales or in charity shops. I also bought some Woodland Scenics palm (in box on left). Next step is to terrain the bases and add some scatter etc.
Posted by tidders2 at 11:08 AM 3 comments:

A bit of fettling and my alternate command sets for the  volunteer battalions are ready for painting. 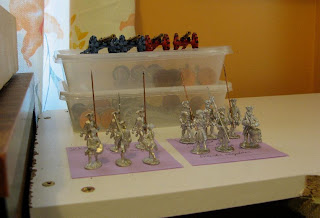 For the French and British regulars the standards will be as per their historical counterparts.
The details of the flags for the european and sepoy regiments are not well known and so I've created some. I've decided on two per battalion. For the french I'll use a colonels flag may be with some colours in the quarter fields and a second flag showing the arms of the Compagnies Des Indes

For the british I'll use one with the arms of the Easty India company and a second with the facing colour of the regiment.

The volunteer battalions from either Monrovia or Wittenberg will have a first flag of the parent east india company and a second derived from their homeland.
Posted by tidders2 at 3:35 AM 3 comments:

One of the first things I'll need is somewhere to pose piccies of finished figs, so I've made up a two-sided backdrop overlay which I can put on my current  'picture poser'.  The first picture below shows my current 'picture poser' with its european style background, next to it is a piice of foamboard which has two slots in the top, this will alllow it to be placed over the current background. In the next picture you can see it in place. 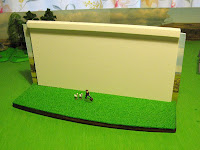 Now I have to create two backdrops, one for each side of the overlay, to show a carribean island and some rural india scene.
For troops for the SYW India period I've started by working on artillery. I have 4 spare artillery pieces, nominally allocated for the Indian allies. Below are some french artillery crew from the 30mm Jacdaw range which I acquired recently. 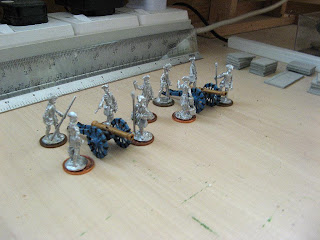 For a couple of  infantry units I will morph two of my existing battalions by using different command stands, the additional figs are ready and need painting.
Posted by tidders2 at 8:39 AM 3 comments: